AN Australian beauty product has been given the thumbs up from British regulatory bodies after complaints over its claim that it temporarily removes wrinkles around the eyes.

My Perfect Eyes, from Melbourne-based The Perfect Cosmetics Company, is sold online and through infomercials here and overseas, including the UK.

Britains Advertising Standards Association (ASA) launched an investigation into the product after a viewer claimed the advertorials were “misleading” and couldn’t possibly remove wrinkles. “It was a pretty hairy time,” said company founder and product creator Penny Lane. “But I know that it works. It is classified as a cosmetic like a lipstick or a mascara and only works when you are wearing it, creating a delicate veil so if you look under a microscope it looks a bit like a spiders web. It covers over the lines, wrinkles and dark circles and compresses puffiness.”

But the ASA ruling dated September 7 upheld the product’s claims after an investigation involving an independent doctor’s assessment.

“The consultant confirmed that the product had ingredients which resulted in an immediate temporary effect on lines and wrinkles around the eye,” the ASA report read. The left eye is before the cream and the right eye is after the cream. Pictures: Supplied Before and after of Australian women using the products. 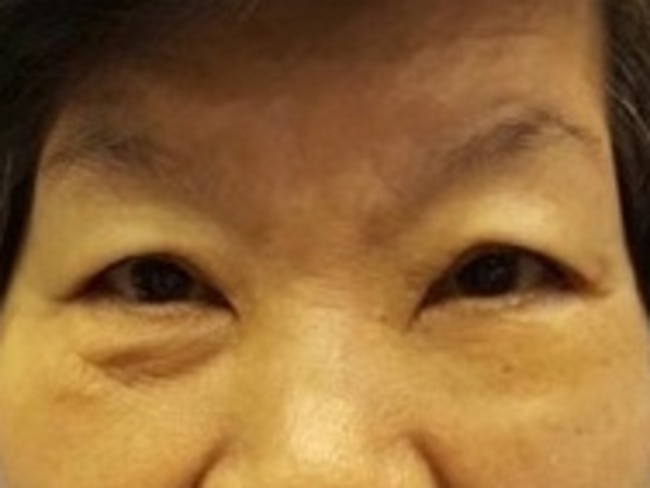 An investigations was launched by Britains Advertising Standards Association found the products claims were accurate. With such bold claims, and a price tag of $99, My Perfect Eyes is used mostly by women, but also men.

Lane is proud of the fact it is produced on ground in Melbourne.

Celebrities to have reportedly used the product include Sarah Jessica Parker and Emma Bunton internationally and Sonia Kruger locally.

Lane is married to Commonwealth Game gold medal boxer Brad Pitt and coincidentally the Hollywood star of that name has also used My Perfect Eyes. “Celebrities use it because it gives them a natural look,” said Lane.

“You can still smile and show expressions and not look fake. When your face is relaxed your skin looks flawless but when you smile you’ve still got expression around your eyes.

“I can understand people being sceptical because the results are so dramatic. Even now, people I know ask me if it really works but the ASA looked at all of our clinical trials done here in Australia and concluded that the claims we make are true.”